“And so it had taken me all of sixty years to understand that water is the finest drink, and bread the most delicious food, and that art is worthless unless it plants a measure of splendor in people’s hearts.”

I spent my birthday weekend this past March visiting the town Cosoleacaque in Veracruz, Mexico.  Friends of mine were living in a house there along with several musicians.  The town is known for being the birthplace of Son Jarocho music, a folkloric music played on mandolin-size guitars called Jaranas.  The players of the Jarana are called Jaraneros and my friends, along with their housemates, were all Jaraneros.

Within the first 12 hours of my arrival I had to redefine my idea of “bare necessities”.  There was no running water and I had to fill a bucket from the well outside the house, and that bucket had to suffice.  When I finished taking my birdbath I asked for a towel and I was handed a pretty, bright turquoise bandana. When I asked for coffee, that same bandana was pulled off the clothesline and used as a coffee filter.  Then it was washed again and used as (drum roll) a bandana!  So you get the idea what we are working with here.

On the second day we decided to go to the beach.  We were going to get up early the next day (my birthday) and drive to a remote beach, stopping at some majestic waterfalls that were on the way. Along the way we would pick up another Jaranero, one that makes his own guitars, and proceed to the falls.  My friend Ximena suggested that it would be delightful to have home-made manouche to eat at our stop at the waterfalls.  Manouche is a type of Lebanese pizza that I had mentioned in a previous post in The Big Ceci.  It is basically a pizza with the zaatar spice and whatever else you want to add to it.

Now this is tricky business as it is hard enough to get it together to make the manouche at home, let alone in an unequipped kitchen with so many unknowns.  I always tell people that I am a chemist and not a cook and that is particularly true when it comes to baked goods.  The oven in the house was not working so that meant that we would have to make the dough and fixings the night before and then stop at one of the Jaraneros’ houses on the way out.  So we set to working on the dough and one of the musicians asked me to teach him how to make the dough as he had aspirations to become a baker.  So I did a batch and taught him how to do one.  Since there were no measuring utensils, it was all a wild guess and I had no idea what the batches will look like when they rise (if they rise at all).  You usually have to let the dough rise for an hour and half but in this case we had to let them sit overnight.

The next morning I saw that the dough did rise properly (and optimally).  We set out to our first stop, to cook the manouche.  The kitchen there was tiny with barely any utensils. The oven was small and narrow, looking more like something belonging to a playhouse.  We quartered the batches of dough, letting them rise and then washed a bottle of wine and set about rolling out the dough into pizzas.  In the meantime, my friend Anna made desert for the picnic, lemon bars in a Pyrex dish. 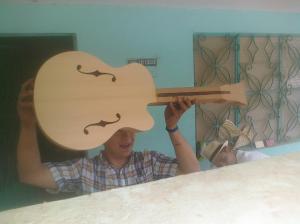 Guitar maker that we picked up on the way to the waterfall.

We put the Pyrex dish on the bottom rack of the oven, and the first batch of pizzas on the top rack.  We checked 10 minutes later and saw that nothing was heating up much.  So our host turned up the oven full blast.  Ten minutes later there was a constant flow of white smoke seeping from the back of the oven.  Our host inspected it, waved her hand at the smoke and let things be, the room was well ventilated.  We finished baking our first batch batch of Manouche and put in the second.  A few minutes later the Pyrex dish that contained our dessert, turned out not to be “Pyrex” (thought labeled so) and it exploded.  The oven was opened; the lump of lemon bar and fractured glass was removed from the oven and set on the oven door to salvage some of the dessert from the wreckage.  The manouche was unharmed by the explosion and I continued to place batch after batch, some with zaatar and cheese and some with cheese.  After removing the manouche we added fresh mint and tomatoes and stacked the manouches on top of each other and wrapped them up in tin foil.

When we got to the waterfall there was no one else there.  There were three different falls pouring into a simmering lagoon.  We sat around on the rocks and the jaraneros pulled out their Jaranas and began to strum while we set about preparing the food.  When Anna reached into the bag to pull out the wrapped maouches she looked up and beamed at me.  “They’re still hot!” 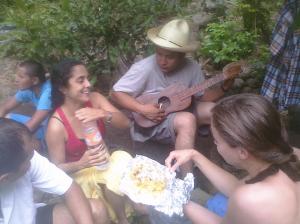 The basic dough recipe that I used is one from Cooksillustrated.com which makes for good grilling pizza.  This is great for barbeques, especially when you have a vegetable garden and are able to pick fresh spearmint and tomatoes and plop them on the pizza.  Just make sure that you mix the tomatoes with salt and let them drain so you don’t get a soggy pizza. 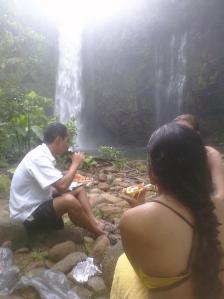 Here is the dough recipe: 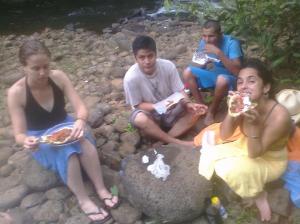