If I had a cookie for every time a great cook has told me they don’t/can’t/won’t bake desserts because they “don’t like to follow recipes,” or they “like to improvise,” or they “can’t be precise” (or some other reason along these lines), I’d be set for life.

I’ve never really understood the apprehension cooks have about desserts.  Cooking and dessert-making have always seemed connected to me.  Perhaps that’s because I have a huge sweet tooth and started baking before I ever started cooking anything too interesting, but nevertheless…

In today’s post, I’m going to share a dessert-making story from this week that will hopefully debunk some of the myths about dessert-making being strict and rigid (while perhaps reinforcing them too. You’ll see what I mean shortly).

I just returned from a month of touring with my band Red Baraat, so I’ve been excited to have more time to get down in the kitchen and enjoy the summer’s bounty now that I’m home.  By my second day back, I had a few projects lined up.  One was making a banana pudding for a friend who cat-sat for me while I was out of town, and the other was making a dessert for a small gathering that evening.  With my puddingy reputation, I figured I’d go pudding all around, hoping to pull off a blueberry pudding pie with fresh mint.  I felt confident in my pudding abilities, so I winged it.  I made a double recipe of vanilla pudding (using the seeds from a vanilla bean), saved half for the banana pudding, and then added a puree of a handful of New Jersey blueberries and a sprig of mint from my fire escape (the only food I can manage to grow with my touring schedule) to the other half.

Suddenly my beautiful, creamy vanilla pudding looked like a blueish liquidy disappointment.  I stuck it in the fridge with the hopes that it might set, but I was feeling pessimistic.  Something about the little bit of blueberry puree seemed to undermine the thickening properties of the cornstarch (other hypotheses are welcomed).  Sure enough it was soon clear that the blueberry pudding was a failure, and I needed to rethink my strategy.  I had already been to the grocery store once and didn’t want to go again (and didn’t really have time either).

I still had half a pint of blueberries that I was determined to use and a couple of limes in the fridge.  Then it dawned on me.  Perhaps I could adapt my go-to (key) lime pie recipe!  I didn’t have enough limes, but I did have some bottled organic lemon juice (for emergencies like this one) and a carton of OJ.  So, I zested and juiced my two limes, and added lemon juice and a little orange juice for the remaining liquid, and made a mixed citrus pie filling.  I stirred in the whole blueberries before pouring it all into a vanilla wafer pie crust (I bought the vanilla wafers for the banana pudding) and baked it.

I was a little nervous, but when I took it out of the oven it looked beautiful, and the crowd was quite pleased with the results.  I failed to take any pictures, so you’ll have to take my word for it – it was a success in improvisational baking! 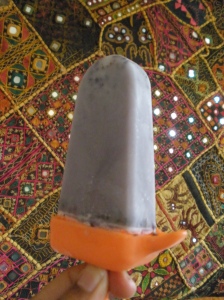 As for the aforementioned failure, there is a silver lining.  I bought popsicle molds a couple of weeks ago (inspired by the ridiculous heat wave), into which I poured the liquidy pudding. I apprehensively tried the makeshift pops the next day and was pleased by the creamy texture and refreshing blueberry-mint flavor. Disaster averted!

So the take-home message here is you CAN freestyle, change recipes, and experiment creatively in your dessert-making (just like you do in your cooking), but practice will show you what does and doesn’t work – which is also a lot like cooking, right?  I’m sure we’ve all had some failed attempts at creativity in our savory cooking (that would be a fun post – worst cooking experiments ever?), so there’s really no need for baking anxiety.

Without further delay, here is how I made the Citrus Pie with Blueberries. I encourage you to change the recipe.

For crust:
35-40 vanilla wafer cookies (or ginger snaps or graham crackers)
Half a stick of butter

For filling:
Half a pint of fresh blueberries
3/4 cup of citrus juice (mine was mostly lime and lemon juices with a little orange)
the zest of 2 limes (the more zest the more limey, or lemony)
1 can of sweetened condensed milk
2 eggs

Preheat oven to 350 degrees.  Crush the cookies in a food processor, blender or by hand.  Incorporate the melted butter.  Press buttery crumbs into a pie dish with your hands, using the bottom of a glass to help you smush it down and up on the sides of the pie dish nicely.  Bake the crust for about 8-10 minutes until it begins to brown.

While the crust is baking whisk together the eggs, and add the condensed milk, citrus juice, and zest until smooth and creamy.  Gently stir in the blueberries.  Pour the filling into the crust and bake for about 20 minutes until set.  Cool completely in the fridge and serve with a dollop of lightly sweetened (or unsweetened) whipped cream.